NJDOT worker on breathing tube after deadly I-78 crash 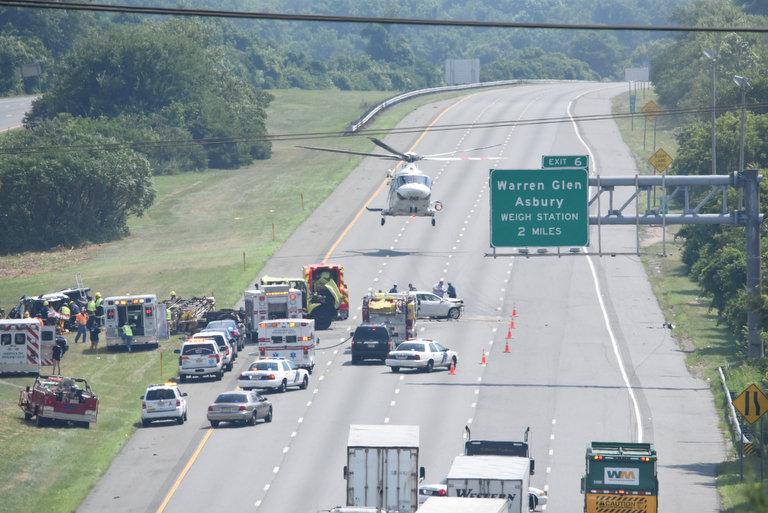 A veteran New Jersey Department of Transportation worker whose job is to protect co-workers was seriously injured herself in Friday’s fatal crash on Interstate 78 in Warren County.

Keli McCatharn, 50, of Phillipsburg, was seated in a DOT dump truck outfitted with a crash attenuator — a rear-mounted cushion designed to absorb impact and act as a buffer between moving traffic and DOT landscapers, according to New Jersey State Police.

A crash about 10:45 a.m. in the eastbound lanes in Greenwich Township resulted in a pickup truck plowing into the back of the yellow-green DOT truck, which was straddling the left shoulder and grassy median.

A passenger in the pickup, 49-year-old Sarah Azakitvuc of McCaysville, Ga., died at the scene and her husband Frank, 58, was seriously injured.

The attenuator did its job of protecting the workmen doing landscaping maintenance in the median but McCatharn took the brunt of the blow to the four-door DOT truck, said state police Sgt. Greg Williams.

On Monday, she was on a breathing tube in the intensive care unit at St. Luke’s University Hospital in Bethlehem, according to her husband, James McCatharn.

“She’s come a long way since Friday,” he said. “She’s not able to speak because of the tube but she’ll open her eyes and she’ll squeeze my hand when I tell her it’s me. She’s got a long haul ahead of her but I think she’ll pull through.”

The couple have been married 18 years and she has worked with the DOT for 28 years, James said.

State police continue to investigate the crash that prompted the shutdown of the busy highway and snarled traffic in New Jersey and Pennsylvania for hours. It happened about 4.5 miles from the Pennsylvania line.

After being hit by a merging car, the Azakitvucs’ pickup rolled several times and crashed into the back of the state-owned truck, state police said.

James McCatharn said he’s grateful his wife is alive given the severity of the crash. He found out about it shortly after it happened from a co-worker who is a volunteer firefighter in the Phillipsburg area, he said.

“She was doing her job of protecting the other guys on the mowers,” he said of his wife. “She got banged up pretty good. It was a horrible crash.”