Last votes needed to legalize marijuana in N.J. may come from these 3 GOP moderates. 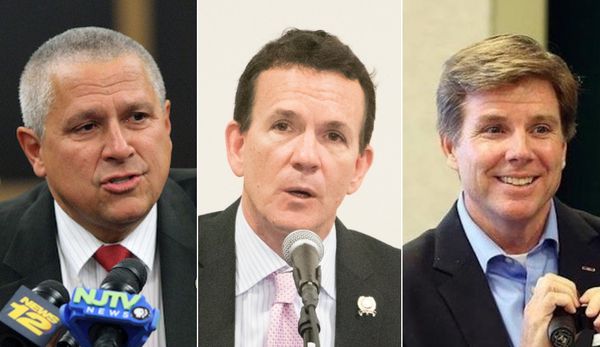 With Democrats who lead the state Senate still tantalizingly short of votes needed to legalize recreational marijuana in New Jersey, a triumvirate of moderate Republican senators has emerged to seize the moment. The move was first reported in NJ Cannabis Insider.

Sensing they are at a point of maximum leverage, state Sens. Declan O’Scanlon, R-Monmouth, Christopher “Kip” Bateman, R-Somerset, and Chris Brown, R-Atlantic, want a package of concessions from Gov. Phil Murphy that could give the freshman Democratic governor the votes he needs — and Republicans a shot at previously unimaginable spending reforms.

“There should be no votes for marijuana legalization until we clearly delineate where this money will be invested,” O’Scanlon said Wednesday afternoon. “And the top of the list has to be training of DREs,” or Drug Recognition Experts.

A spokesman for the governor declined comment, but Democratic insiders said Murphy was amenable to all of the requests, as is Senate President Stephen Sweeney, D-Gloucester. Less clear is whether state Assembly Speaker Craig Coughlin, D-Middlesex, will support dedicating the marijuana tax revenue to the GOP initiatives. Calls to Sweeney and Coughlin were not immediately returned.

How N.J. could lose out on millions of dollars if it doesn’t legalize weed soon

In recent weeks, NJ Cannabis Insider has looked closely at the issue of identifying cannabis-impaired drivers, which will require training hundreds of new DREs at costs that are potentially crippling to smaller municipalities.

Bateman, a municipal prosecutor in Branchburg Township for over 25 years, called impaired-driving prosecution the single-most important challenge to be surmounted before legalization.

“We have an obligation to protect the public especially because this is the most densely populated state in the nation,” said Bateman. “Until I see that in a bill, I can’t commit to it. But if it were, obviously that would weigh heavily in a lot of Republicans’ decision-making.”

With more than 3,100 deaths in 2018, New Jersey’s opioid toll set a record for the fourth year in a row. Deaths have quadrupled from a decade ago, according to preliminary data collected by the state Attorney General’s Office.

The Republican senators also see a huge opportunity to make the state’s economy fairer to homeowners laboring under the highest property taxes in the nation by ending the diversion of property tax relief revenues from the state’s Energy Tax Receipts Property Tax Relief program. In his first budget, Murphy counted more than three-quarters of a billion dollars in energy-tax receipts as an “on budget” state revenue, leaving municipalities terrified the state might just hold the funds in a budget crunch.

The fact that so much of what the Republicans want is to reclaim state funds long ago promised makes their case harder to dismiss, O’Scanlon noted.

For example, in 2004, Gov. Jim McGreevey set about fixing the state’s archaic 911 system. More than a dozen years later, it’s no closer to being modernized, because the money frequently was diverted.

“We have stolen that money,” O’Scanlon said. “There’s no softer way to put it, and it’s arguable that people are dying because of our three-card Monte.”