7 people have died on this 40-mile N.J. highway this year 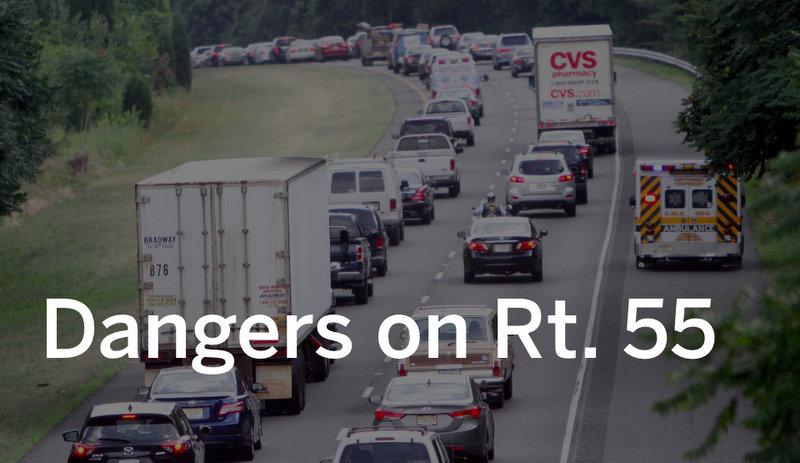 The 40-mile stretch of state highway known as Route 55 has had more than its share of dangerous accidents over the years, many of which were fatal. So far in 2016, 7 people died on Route 55.

Seven people have died in accidents on Route 55 so far this year.

That’s the same number of fatalities reported for all of 2015. Six died in both 2013 and 2014, while no fatalities were reported in 2012, according to New Jersey State Police accident statistics.

The latest death occurred Friday morning when a woman was struck by a vehicle after she crashed into a tree and walked back to the roadway to seek help.

Route 55 is a major South Jersey artery, connecting residents in Gloucester County to Route 42 (Atlantic City Expressway), the New Jersey Turnpike, Interstate 295 and Interstate 76 into Philadelphia. At the southern end in Cumberland County, 55 links motorists to Routes 47, 49 and 56.

The reasons for the accidents are varied, according to reports from 2013 and 2014.

Among the causes listed on NJSP reports were driver inattention, drunken or drugged driving and unsafe speed. One was attributed to tire failure.

The final statewide fatal accident report for 2015 hasn’t been released yet.

Police monitor accident reports to spot trends and determine where stepped up enforcement may be needed, explained state police spokesman Capt. Stephen Jones. When they see spikes in accidents related to excessive speed or drunken driving in a particular area, police would increase patrols in those areas.

As for Route 55 itself, it’s fairly free of obstructions, is flat and the road surface is in good condition, Jones said.

There have been 7 fatal crashes on Route 55 so far this year. (Google Maps)

More than 72,000 vehicles a day travel on Route 55 in the Deptford area, according to state Department of Transportation figures, while that figure is around 33,000 in the Vineland area.

Monitoring accident trends and increased enforcement can only do so much, though, Jones added. No matter the roadway, certain realities apply.

“The faster you go, the less time you have to react to anything else in the roadway,” Jones noted, whether its another vehicle or a deer streaking across the highway. Wildlife is a key concern along 55. “That is a very rural roadway that runs through a lot of forested areas.”

These are the six 2016 fatalities that occurred on Route 55 prior to the Friday accident.