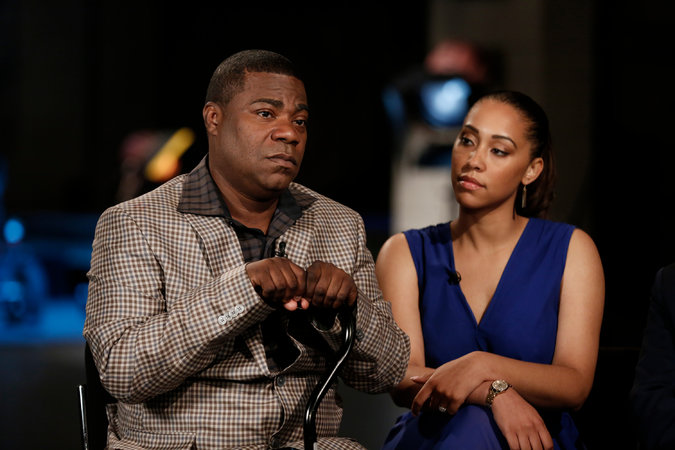 Tracy Morgan and his fiancèe, Megan Wollover, during an appearance on “NBC Nightly News” in June. Credit Peter Kramer/NBC

Federal transportation regulators on Tuesday cited a Walmart truck driver’s fatigue as the chief cause of a crash last year that killed the comedian James McNair and critically injured Tracy Morgan, a star of the television series “30 Rock.”

National Transportation Safety Board investigators, presenting their findings at a public hearing in Washington about the June 2014 crash on the New Jersey Turnpike, said unused seatbelts exacerbated the injuries, and criticized the training of emergency medical workers who struggled to remove Mr. Morgan and some of the other six people who were trapped inside an overturned limousine van.

In addition, the limousine had been customized, officials said, leaving the passengers without any available exits until emergency responders cut out part of a plywood panel that had been installed between the passenger compartment and the cab.

“Their single means of exiting had become inoperable in the crash,” the board chairman, Christopher Hart, said.

Even if that sliding door had worked, it was above passengers’ heads, because the van had flipped onto its side. The officials said they shuddered at what might have happened had the vehicle caught fire.

The crash left Mr. Morgan with a severe brain injury and killed Mr. McNair, 62, who was known as Jimmy Mack. Eight other people were injured when the Walmart truck — traveling 65 miles per hour in a 45 m.p.h. zone as it approached a construction area where traffic was backed up — rear-ended the van and set off a chain-reaction collision.

The truck driver, Kevin Roper, is awaiting trial in New Jersey on charges of vehicular homicide and assault by auto. Mr. Morgan settled a lawsuit against Walmart in May for an undisclosed amount. In an interview on NBC in June, Mr. Morgan said that he was not ready to return to his comedy career, and was still experiencing forgetfulness, headaches and nosebleeds.

Federal officials cast blame for the damage on a wide range of lax training and safety programs, as well as lapses in the emergency medical response. It took around 40 minutes for responders to extricate the passengers.

Medical workers initially “failed to recognize how serious the situation was and how many severely injured occupants” were in the van, Thomas Barth, a safety board investigator, said. By the time more highly trained medical workers arrived, “they were overwhelmed,” because “they didn’t have enough resources on hand,” Dr. Barth said.

Investigators suggested that communication problems could have been compounded because medical teams came from different jurisdictions and had different levels of experience. They suggested that New Jersey set uniform training standards for groups that provide emergency medical service on the turnpike.

Mr. Roper had been awake for more than 28 hours at the time of the crash. He had driven 800 miles overnight from his home in Georgia to a Walmart distribution center in Delaware, where he began his delivery.

Investigators questioned Mr. Roper’s decision to take on the load despite having only about an hour remaining in the period he could be on duty according to federal regulations. He did not apply the brakes until he was within 200 feet of the van.

His fatigue, the board determined, made him “slow to react.”

The board recommended that companies like Walmart develop more robust fatigue management programs to educate dispatchers, drivers and their families on the risks of sleeplessness.

Drowsy driving has plagued truck drivers for decades, but the Senate passed a bill last month that exempted some truck drivers from rules limiting their hours of service.

Senator Richard Blumenthal, Democrat of Connecticut, who has opposed efforts to loosen such restrictions, said the safety board’s findings affirmed the need for stronger regulations. In a statement on Tuesday, he criticized the Senate for passing “a transportation bill full of special interest gifts to the trucking industry.”

Mr. Blumenthal added, “Allowing more tired truckers on our roads will only lead to more accidents like the horrific accident that injured Tracy Morgan last year.”

Wearing seatbelts and properly adjusting head restraints could have kept the passengers from flailing about, investigators said. Acknowledging that passengers tend to overlook available safety equipment when they are in a social setting, the board recommended making safety briefings mandatory on such limousine vans.

The truck was equipped with a collision awareness system to alert drivers to dangers ahead, but the data did not indicate that any alerts were made.