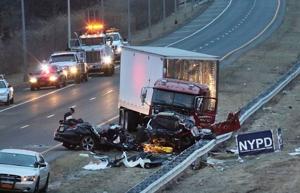 A New Jersey police officer is accused of driving drunk on March 20 and crashing head-on into a tractor-trailer driven by a Manheim man. Two people were killed and three people were injured.

A Linden, New Jersey, police officer suspected of driving drunk in a fatal wrong-way crash that injured a Manheim man in March remains on the city’s payroll.

Officer Pedro Abad’s blood-alcohol content was .24 – three times the legal limit – at the time of the March 20 crash, according to officials.

“This destroys the image of the police department for years,” Maria Haberfeld, a professor at John Jay College of Criminal Justice, told NJ.com. “It’s incomprehensible to me that he’s still on the force. It taints the whole department.”

Abad, 28, took a wrong turn and ended up driving north in the southbound lanes of the West Shore Expressway in Staten Island the night of the accident, according to NJ.com.

He crashed head-on into a tractor-trailer driven by a 33-year-old Manheim man. Two passengers in Abad’s car – Joseph Rodriguez and fellow Officer Frank Viggiano, both 28 – were killed. Abad and another fellow officer, Patrick Kulac, 23, were critically injured.

Abad and his passengers had just left a Staten Island strip club, according to the Ney York City Police Department.

The truck driver suffered non-life threating injuries. The day after the accident, a NYPD media spokesman wouldn’t release the truck driver’s name, but said he was treated and released from a hospital.

The truck he was driving was from Snavely’s Mill, which grinds flour at three locations including Lititiz. Douglas Snavely, an owner of the business who lives in Lititz, declined to provide the driver’s identity or comment on the accident the day after the crash on advice from his attorneys.

Abad had been previously charged with drunk driving after two separate accidents, according to NJ.com. He pleaded guilty to one of those incidents in 2013.

A judge suspended his license on Oct. 16, 2013, following a guilty plea on a DUI charge in Rahway, New Jersey, according to NJ.com.

NJ.com also reported that New Jersey state records show that Abad was in eight accidents from September 2005 to June 2013, and he received violations in only two of those wrecks.

Linden police are still reviewing the case. According to NJ.com, the police department is awaiting results of the New York investigation. New York authorities have not filed any charges against anyone involved in the crash.