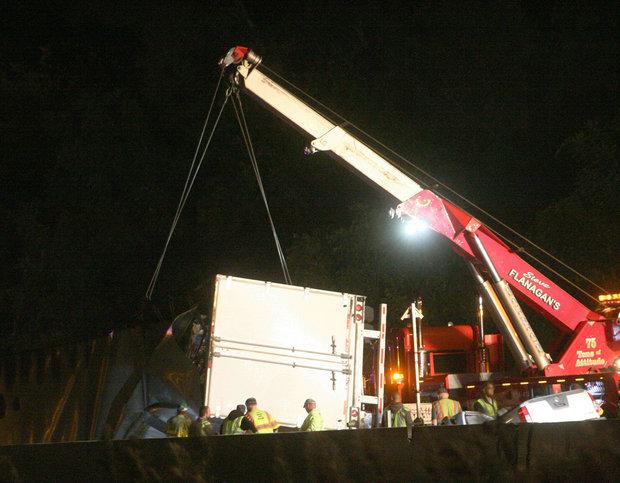 A large crane is used Wednesday night to remove a tractor-trailer which overturned on top of a pickup truck near where Interstate 295 and the lanes of the New Jersey Turnpike merge in Carneys Point Township. The driver of the pickup was killed, authorities said. (Bill Gallo Jr. | For NJ.com)

CARNEYS POINT TWP. — Police have identified the man killed when a tractor-trailer overturned on top of his pickup truck Wednesday night.

Andrew Steinman, 30, of Newark, Delaware, died in the accident which took place around 6:13 p.m., according to New Jersey State Police Lt. Brian Polite.

The crash took place in the area where southbound traffic from Interstate 295 and the New Jersey Turnpike merge not far from the base of the Delaware Memorial Bridge.

Steinman was alone in his Nissan pickup at the time of the crash. The rear section of the tractor trailer landed on top of the front section of Steinman’s vehicle. He was pronounced dead at the scene, authorities said.

The driver of the tractor-trailer was identified by Polite as Heyward Wilson, 57, of Winston-Salem, North Carolina. Wilson was also alone in his truck and was not injured, police said.

According to Chief Ted Stranahan of the Carneys Point Fire Department and Rescue Squad, which responded to the scene, the truck was carrying bundled recycled plastic.

A large crane was brought in to right the overturned tractor-trailer.

According to Stanahan, once the it was removed, the Jaws of Life were used to extricate Steinman from his pickup.

Along with Carneys Point, Deepwater Fire Department and Pennsville EMS responded to the scene.

The accident caused traffic backups in the area. Southbound traffic was diverted off I-295 onto Route 140 and directed to use Route 130 through Deepwater to gain access to the Delaware Memorial Bridge.

It was after midnight before the accident scene was cleared, Stranahan said.

The scene of Wednesday night’s crash is a common site for accidents involving large trucks overturning as they merge from the curved ramp coming from I-295 onto the lanes with the turnpike traffic.