The truck, owned by a Toms River powerwashing company, overturned after it rear-ended a stopped vehicle, police said. 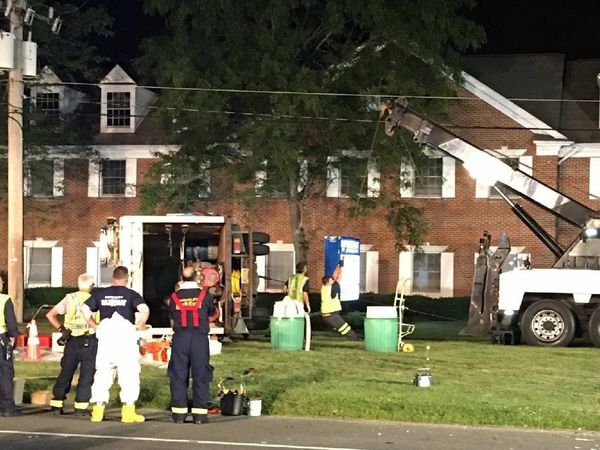 Lakehurst Police Chief Eric Higgins said the box truck from Jeff’s Power Washing, a Toms River company, was on Route 70 when it rear-ended a vehicle that was stopped in traffic. The box truck, driven by Brian Saunders, 32, of Toms River, steered off the road and overturned on a grassy area off the road as a result of the collision, which Higgins said was reported at 4:41 p.m.

“The truck was opened and (there was) found to be large quantities of chlorine leaking,” fire officials said. Higgins said the truck was carrying containers holding liquid chlorine and other power washing chemicals, and some of the chlorine had spilled.

Saunders and the driver of the other vehicle, who was not identified, suffered minor injuries and were treated at the scene, Higgins said. One firefighter was treated for heat exhaustion, fire officials said.

The Berkeley Township Hazmat unit responded and secured the chemicals before the truck was removed, and hazmat personnel cleaned up the chlorine that had spilled inside the truck, Higgins said.

The crash and the ensuing cleanup and investigation closed Route 70 between Orchard Street and Lake Street, forcing traffic to detour for seven hours, Higgins said.

“We would also like to send a huge thank you to Three B’s, as shortly after arrival they brought out numerous cases of water and shortly after, donating a very generous amount of amazing food as this call was over 8 and a half hours in duration.,” fire officials said.

Editor’s note: This article was updated with information from Lakehurst Police Chief Eric Higgins on the truck involved and the driver’s name.