The crash caused the dump truck, belonging to Bil-Jim Construction, to overturn. 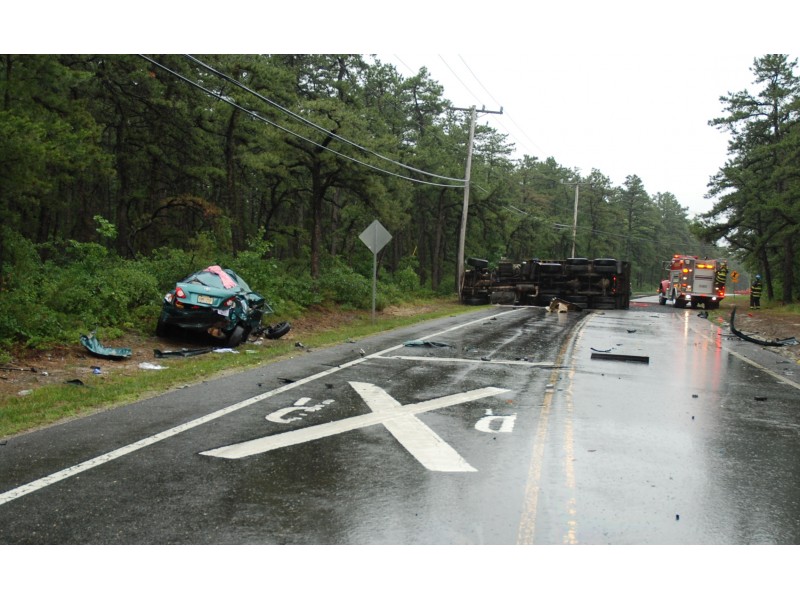 A Jackson Township man and a Little Egg Harbor Township woman both were injured in a car-dump truck collision on Route 539 Thursday morning that caused the dump truck to overturn, police said.

Erin K. Dougherty, 40, of Little Egg Harbor, and Robert J. Letu, 72, of Jackson, both were taken to Jersey Shore University Medical Center, Neptune, for treatment after the crash, which happened about 6:30 a.m. Thursday, Manchester Police Capt. Todd Malland said. Their current conditions were not known, he said.

Dougherty was northbound on Route 539 in a 2010 Toyota Corolla when her car crossed the center line and was hit by a 2005 Peterbilt dump truck driven by Letu, who was southbound on Route 539. After the collision, the dump truck, owned by Bil-Jim Contruction from Jackson, turned on its passenger side, spilling 25 tons of gravel on the road, Malland said.

Dougherty was treated at the scene for back pain and lacerations to her arms and body and Letu was treated for shoulder, back and neck pain, Malland said.

The roadway was closed and traffic was detoured for several hours during the investigation, he said.

Patrolmen Douglas Higgins and Thomas O’Hare of the Traffic Safety Section are investigating.