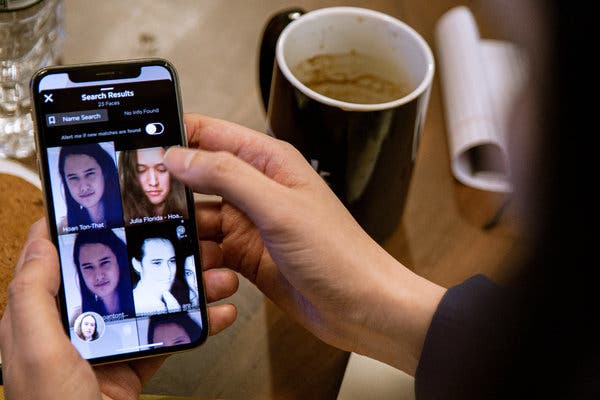 A mysterious company that has licensed its powerful facial recognition technology to hundreds of law enforcement agencies is facing attacks from Capitol Hill and from at least one Silicon Valley giant.

Twitter sent a letter this week to the small start-up company, Clearview AI, demanding that it stop taking photos and any other data from the social media website “for any reason” and delete any data that it previously collected, a Twitter spokeswoman said. The cease-and-desist letter, sent on Tuesday, accused Clearview of violating Twitter’s policies.

The New York Times reported last week that Clearview had amassed a database of more than three billion photos from social media sites — including Facebook, YouTube, Twitter and Venmo — and elsewhere on the internet. The vast database powers an app that can match people to their online photos and link back to the sites the images came from.

The app is used by more than 600 law enforcement agencies, ranging from local police departments to the F.B.I. and the Department of Homeland Security. Law enforcement officials told The Times that the app had helped them identify suspects in many criminal cases.

Clearview’s database of photos dwarfs those previously used by law enforcement agencies. Other technology companies capable of building such a tool, like Google, have decided not to because of concerns about the potential for abuse.

Tor Ekeland, a lawyer for Clearview, confirmed that it had received Twitter’s letter and said the company “will respond appropriately.” He declined to comment further.

The Times article set off angry protests from Democratic lawmakers and privacy watchdogs, who said it was paving the way for universal facial recognition technology that would effectively end people’s ability to remain anonymous while in public.

On Wednesday, Senator Edward J. Markey, Democrat of Massachusetts, also sent a letter to Clearview, addressed to its co-founder and chief executive, Hoan Ton-That. “Widespread use of your technology could facilitate dangerous behavior and could effectively destroy individuals’ ability to go about their daily lives anonymously,” Mr. Markey wrote.

The senator’s letter poses 14 questions to the company and asks that it respond by Feb. 12. Mr. Markey wants Clearview to provide a list of all law enforcement and intelligence agencies, as well as private entities, that use the app. He also asked about the collection of children’s information by the company and how it vets its product for accuracy and security.

“In the absence of a rigorously enforced consumer privacy law, technology companies will continue to develop and market products that pose existential threats to our fundamental privacy rights,” Mr. Markey said in a statement.

Senator Ron Wyden, Democrat of Oregon, said on Twitter that he was concerned that Americans’ personal photos were being included in a corporate database without their knowledge. He also said it was “extremely troubling” that Clearview had contacted police officers who were talking to the media, apparently after monitoring the activity of police officers who uploaded a photo of a Times reporter to the Clearview app.

Mr. Ekeland said: “Senator Wyden’s office reached out to us in December, and we are in the process of scheduling a meeting. We look forward to it.”

In an interview with The Times this month, Mr. Ton-That defended Clearview’s technology as a valuable resource for law enforcement. “Our belief is that this is the best use of the technology,” he said. He added that the company had no plans to release its app for use by the public, though some private companies use it.

Mr. Ton-That acknowledged that Clearview had amassed its database of photos by “scraping” them from publicly available websites like Facebook and Twitter. The social media companies said such activity would violate their terms of service, and Facebook said it was reviewing the situation with Clearview and “will take appropriate action if we find they are violating our rules.”

It isn’t clear what power Twitter and other social media sites have to force Clearview to remove images from its database. In the past, companies have sued websites that scrape information, accusing them of violating the Computer Fraud and Abuse Act, an anti-hacking law. But in September, a federal appeals court in California ruled against LinkedIn in such a case, establishing a precedent that the scraping of public data most likely doesn’t violate the law.

The case “eviscerated the legal argument that Facebook used to use on scammers and spammers,” said Alex Stamos, director of the Stanford Internet Observatory and a former chief information security officer at Facebook.

A Venmo spokesman, Justin Higgs, said on Wednesday, “Scraping Venmo is a violation of our terms of service and we actively work to limit and block activity that violates these policies.”

One of Clearview’s early investors was Peter Thiel, a venture capitalist who backed Facebook and sits on Facebook’s board of directors. Jeremiah Hall, a spokesman for Mr. Thiel, previously told The Times that Mr. Thiel’s “only contribution” to Clearview was a $200,000 investment that was converted into equity, and that “he is not involved in the company.”