She Texted About Dinner While Driving. Then a Pedestrian Was Dead.

A New Jersey woman was found guilty of vehicular homicide by a jury that weighed whether her actions were on par with drunken driving. 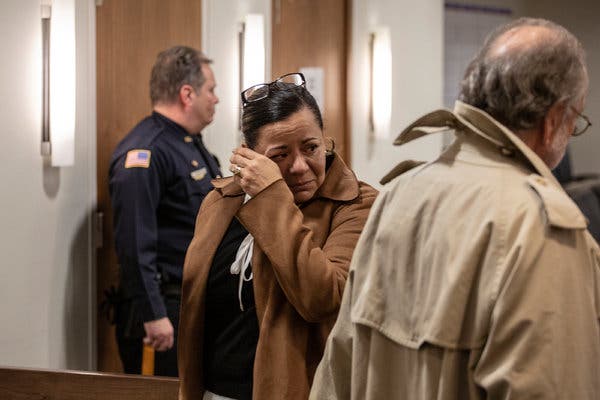 Alexandra Mansonet was found guilty on Friday. She caused a fatal accident after texting on her cellphone.Credit…Bryan Anselm for The New York Times

FREEHOLD, N.J. — One woman was out for a walk and a taste of fresh air during a break from her job as a scientist at a New Jersey fragrance manufacturer. She and her husband had been trying to get pregnant, and brief bouts of exercise, away from the laboratory’s smells and fumes, were part of that plan.

A second woman was behind the wheel of a black Mercedes-Benz, headed to work as chief executive of a nonprofit in a city that had once lauded her as civic leader of the year for her extensive work with troubled youth.

Their lives collided with devastating speed in the coastal town of Keansburg just before 8:20 on a Wednesday morning, leaving the woman out for a walk fatally injured and the driver facing a charge of vehicular homicide, accused of texting while driving.

On Friday, a jury found the driver, Alexandra Mansonet, guilty of vehicular homicide in a case that was believed to be the first time a New Jersey jury was asked to apply a 2012 law that places texting while driving on par with drunken driving.

The case has focused attention on the nationwide crisis of distracted driving, as well as how rare and difficult prosecutions can be.

“It’s a relatively new issue,” said Kara Macek, a spokeswoman for the national Governors Highway Safety Association. “In fatal crashes, it’s much more difficult to obtain evidence that a driver was distracted.”

Ms. Mansonet’s car had plowed into the back of a Toyota Corolla not far from her home, just past a bridge that crosses over a creek that spills into the nearby bay and the Atlantic Ocean beyond. The Corolla then hit the woman who had been out for a walk, sending her flying into the air.

Ms. Mansonet, 50, testified that she had looked down to turn on a rear-window defogger just before the Sept. 28, 2016, crash. “I looked up and the car was right in front of me,” she said.

She faces up to 10 years in prison when she is sentenced.

When the foreman of the jury, which had deliberated for two and a half days, read the one-word verdict, “guilty,” Ms. Mansonet placed her left hand to her face and breathed deeply while family members behind her wept. She cried as she exited the courtroom.

Her lawyer, Steven D. Altman, noted how commonplace texting while driving has become. “It’s going to be very difficult for her to deal with the fact that at sentencing she could be incarcerated for something we are all guilty of doing on a daily basis,” he said.

The pedestrian, Yuwen Wang, died days after the collision at a hospital that is next to the courthouse in New Brunswick where she and her husband, Steven Qiu, had said their vows six years earlier. The couple had celebrated their anniversary the night before the crash.

Mr. Qiu said he and his family were comforted by the verdict. “I’m really grateful,” he said, adding, “I hope more people could realize the consequences of texting while driving.”

His wife’s final words to him came in the form of a cheerful but mundane farewell. “Have a good day,” Mr. Qiu recalled her saying.

The text at the heart of the trial was equally ordinary in a culture where streams of shorthand cellphone messages have become ingrained in modern life. “Cuban, American or Mexican. Pick one,” Ms. Mansonet’s former sister-in-law had texted to ask about her preference for dinner choices, the assistant prosecutor, Christopher Decker, said in court.

Where and when Ms. Mansonet read the text, and when she had begun to tap out a reply, became central to the trial in Monmouth County Superior Court in Freehold. The prosecutor argued that the unsent text — the letters “m” and “e” — were the start of a response about her dinner choice.

Ms. Mansonet, in testimony, conceded that she had typed the letters “m” and “e,” but said she did not remember when. “I thought, ‘I’m going to call her up because I don’t know if I want Mexican,’” she testified.

Dr. Wang, 39, was originally from Taiwan and had recently earned her Ph.D. in New Jersey, her husband said. She is among the increasing number of pedestrians killed annually; last year, the nationwide pedestrian death toll of 6,283 approached a three-decade high.

New York, in 2001, became the first state to outlaw driver cellphone use.

Five years later, the deaths of two scientists in Utah in a texting-related crash helped fuel a nationwide push for stricter laws.

The vast majority of the country — 47 states and Washington, D.C. — now bans text messaging for all drivers. Of the three states without an all-driver texting ban, two prohibit novice drivers from texting and one restricts bus drivers from sending texts.

Approximately 10 percent of the fatal crashes in the country between 2013 and 2017 involved distracted driving, according to data collected by the National Highway Traffic Safety Administration. Of these crashes, about 14 percent were linked to the use of a cellphone. In 2017, for example, at least 401 of the 2,935 distracted-driving traffic fatalities were tied to cellphone usage.

Still, it is difficult to pinpoint the precise number of prosecutions related to fatal crashes and distracted driving. 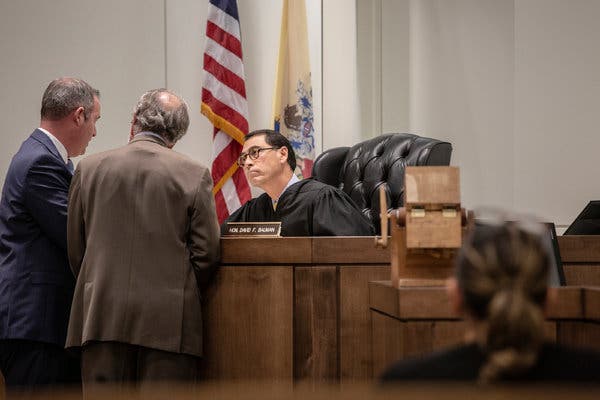 Last year, there were 73 drivers nationwide involved in fatal crashes who were identified as distracted and were charged with crimes unrelated to traffic violations, according to a National Safety Council analysis of data provided by the traffic safety administration.

New Jersey state law was amended in 2012 to add the use of hand-held devices to the list of behaviors that may be interpreted as criminally “reckless” and could constitute vehicular homicide.

But the Monmouth County case is thought to be the only one of a handful of texting-linked vehicular-homicide charges since then to reach trial, according to two past presidents of the Association of Criminal Defense Lawyers of New Jersey. Some drivers originally charged with vehicular homicide pleaded guilty to less serious offenses; one woman died before her case reached trial.

One female juror declined to talk about the verdict or the closed-door discussions as she left court.

“This is a tragedy in every respect,” Monmouth County’s prosecutor, Christopher J. Gramiccioni, said. “Texting while driving puts drivers and pedestrians in grave danger and we are hopeful that the jury’s verdict will reinforce the public’s awareness of this risk.”

Ms. Mansonet, the executive director of the Jewish Renaissance Foundation in Perth Amboy, declined an offer to plead guilty to a charge that would have required a sentence of three to five years in prison, Mr. Altman, her lawyer, said.

Proving the crime of reckless vehicular homicide can be especially difficult without an admission by a driver, passengers who witness phone use, or video evidence, several lawyers and safety experts said. It is also common for there to be other factors, such as speed or intoxication, that contribute to the accident and are easier to prove.

“There are challenges to figuring out whether distraction is the root cause of the crash,” said Maureen Vogel, a spokeswoman for the National Safety Council, a roadway safety organization.

Regardless of Friday’s verdict, the publicity generated by the Monmouth County trial has provided a crucial warning to every driver with a cellphone, said Mitchell J. Ansell, a criminal defense lawyer with 30 years of experience in southern New Jersey.

“A lot of people are watching this,” Mr. Ansell said, “and I think it’s designed to send a message: You are responsible when you are on the road.”

For Mr. Qiu, who met his wife in Beijing and endured a five-year long-distance relationship as the couple secured green cards, the courtroom testimony was too excruciating to sit through most days.

But the renewed focus on the dangers of texting while driving was a small victory, he said in an interview as the jury deliberated.

“In some sense, my wife’s death does become more meaningful,” Mr. Qiu said. “I have to take some comfort from that.”