Sending Lewd Nudes to Strangers Could Mean a Year in Jail 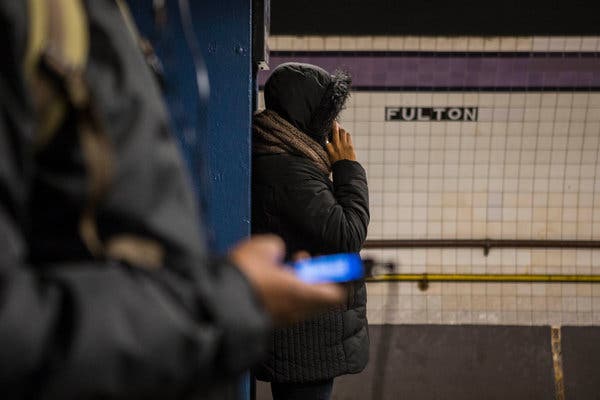 “Technology has made it significantly easier to be a creep,” said Councilman Joseph Borelli, a Republican from Staten Island who is co-sponsoring an anti-flashing bill. Credit: Hiroko Masuike/The New York Times

Rebecca Odorisio was traveling home on a crowded A train on Tuesday when a photo suddenly appeared on her phone from someone identifying himself as “The Enterprise.”

It was a picture of an erect penis, sent to her over AirDrop, an iPhone feature that allows users to send photos and documents to anyone within 30 feet who has left that feature open. Disgusted, she quickly rejected it.

“I felt like I had been punched in the gut,” Ms. Odorisio, 31, a Brooklyn-based actress and singer, said Wednesday. She said it was not the first time something like that had happened to her, adding, “It was extremely violating.”

Kathe Hannauer, 58, had a similar experience last month, as she traveled from Brooklyn to Manhattan on a crowded train during the evening rush.

When an image of male genitalia suddenly appeared on her screen, she said she felt more surprised than flustered. “It was kind of like, ‘At my age?’” she said. “No one has harassed me in the longest time.”

But she worried about what would happen if a young girl was sent such a photograph, so she quickly wrote about the incident on Facebook to warn her friends to turn their AirDrop feature off when they are in public.

The two women were victims of what has become known as cyber flashing, a growing trend of technology-enabled sexual harassment. It has become so common that two lawmakers introduced a City Council bill on Wednesday to explicitly make it a crime, punishable by a $1,000 fine or up to a year in jail.

One of the first news reports of cyber flashing was in London in 2015, when a female commuter told the British Transport Police that she had received lewd photos on her phone via AirDrop as she traveled to work. Since then, people in New York, Toronto and other cities have written articles, tweeted and posted on Facebook and Instagram about how explicit pictures have showed up on their phones, often while on crowded public transportation.

Because AirDrop allows people to send images anonymously, there is no way for a commuter to know who in a busy train car might have sent it. And unlike traditional public lewdness crimes, the sender might not know who exactly within 30 feet is receiving the picture, because the feature identifies nearby phones only by the phone’s nickname.

“In the old days, you had to have a long trench coat and good running shoes,” said Councilman Joseph Borelli, a Republican from Staten Island who is co-sponsoring the anti-flashing bill. “Technology has made it significantly easier to be a creep.”

Some people interpret the images as a harmless prank. About a month ago, Michael May, a medical resident in Manhattan, said he was on the A train when a stranger sent him a photo of a completely nude man covering his genitals with a glowing light saber.

“I thought it was funny,” Mr. May, 26, said. He looked up from his iPhone to try to determine who had sent it, but everyone around him was staring intently at their phones.

Donovan J. Richards, a Democratic councilman from Queens and a co-sponsor of the bill, said the legislation was intended as a bipartisan effort to raise awareness — and to remove the sense of impunity that may embolden those sending the images.

“Keep your pic in your pants,” he said, adding, “If you do it, the message we are sending is that the repercussion is a fine or jail time.”

AirDrop, which first debuted in 2011, is specific to iPhones and other Apple products. It uses Wi-Fi and Bluetooth to communicate over a short range to other devices, like other iPhones. More recently, some Android-enabled devices have had access to a similar feature called AirDroid.

What makes Apple’s feature particularly vulnerable to cyber flashing is that it automatically shows the recipient a preview of the image, then asks the user to accept or decline it. The only way to block the image is to set the AirDrop feature only for use between phone contacts (which is the default setting from Apple) or to turn it off completely.

It is already a misdemeanor in New York State to harass someone by telephone, mail or other forms of written communication. But that law does not explicitly address the issue of visual images.

The bill introduced on Wednesday would add language to the city code that would make it “unlawful for a person, with the intent to harass, annoy or alarm another person, to send by electronic device an unsolicited intimate image.”

Danielle Citron, a professor of law at the University of Maryland and the author of a book on hate crimes in cyberspace, said that clarification could be helpful. New York may be the first municipality to consider a specific law targeting the practice, she said.

“This is unwanted electronic harassment,” she said. “Just like we have telephone harassment laws that have been upheld by federal and state courts, it is absolutely possible to regulate this.”

Ms. Citron said there were no statistics tracking the prevalence of cyber flashing, adding the entire field of electronic harassment is “woefully understudied.”

Sgt. Jessica McRorie, a spokeswoman for the New York Police Department, did not address the issue of cyber flashing directly, but said in a statement, “ Any complaints made in regard to aggravated harassment will be recorded and fully investigated.”

Mr. Richards said that Apple and other tech companies should share the responsibility for warning users about the potential misuse, and modify the feature to be safer. “The onus can’t just be on the Police Department,” he said.

For now, protection mostly consists of past victims warning others to look out. Ms. Odorisio was so upset by the explicit image she received that she posted a censored version of it on Instagram, with her own text over it: “To those who say — aw, come on, that doesn’t happen …”

Under the image it read: “Not asking for it.”

How to lock down your iPhone

There are two ways to restrict the AirDrop feature on an iPhone.

In the main settings app, select “General,” and then “AirDrop.” Then select either “Receiving Off” or “Contacts Only.” The “Everyone” setting is when sexual harassers can send you photos.

Alternately, swiping up from any screen will bring up the control center. Pushing down on the Bluetooth icon will open another menu, in which there is an AirDrop icon. Tap that, and the options for “Receiving Off,” “Contacts Only” and “Everyone” appear.