The case “could cause the court to diverge on constitutional amendments” and have a seminal impact, Justice Barry Albin said during the arguments at the Richard J. Hughes Justice Complex in Trenton. 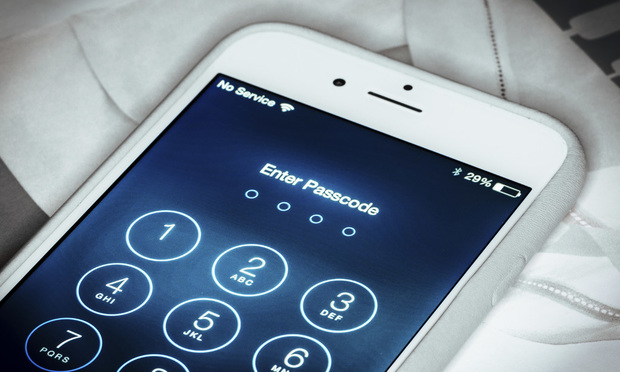 Hours of arguments were heard by the New Jersey Supreme Court on whether a criminal defendant can be compelled to provide passcodes to his locked cellphones and whether such action is considered a form of self-incrimination that can be used against him.

In State v. Andrews, the justices must decide whether to uphold the Appellate Division’s ruling that law enforcement officers acted within legal bounds when they confiscated and retained Robert Andrews’ cellphones and required him to provide passcode information that would allow access to the content of the phones.

Andrews, a former Essex County sheriff’s officer, is currently under suspension and indictment for allegedly aiding a suspected drug dealer while in uniform. Investigators said evidence of such activity existed on the iPhones he owned at the time, but Andrews has never given up the passcodes to them.

The case, which centers on privacy rights and advancing technology, “could cause the court to diverge on constitutional amendments,” and have a seminal impact, said Justice Barry Albin during Tuesday’s arguments at the Richard J. Hughes Justice Complex in Trenton, which ran for nearly three hours.

Defense counsel for Andrews, Charles Sciarra of Sciarra & Catrambone in Clifton, opened by telling the court that it needed to overturn the Appellate Division’s decision in the case. He referred to the contents of a cellphone as “a private enclave.”

“I don’t think the remedy of contempt is workable moving forward because the court would have to engage in a full hearing into the accused person’s inability to remember a code,” Sciarra said. “There’s a testimonial aspect to giving up passcodes to a cellphone. At this juncture, I don’t think any case law says that contents of one’s mind can be accessed and compelled.”

Sciarra pointed to recent cases in Florida and Pennsylvania.

“Pennsylvania’s Supreme Court just found in our favor,” Sciarra said. “None of the dominoes are falling on behalf of the states. The Fifth Amendment does not compel someone to give up the contents of their brain to further the state’s prosecution.”

“A passcode is not just a random set of numbers, but rather a specific sequence of letters or numbers set up so one can remember it,” Sciarra added.

Looking at Chief Justice Stuart Rabner, Sciarra said, “In the Guarino case, this very court affirmed that New Jersey goes further than the federal Fifth Amendment in protecting the right against self-incrimination. This superior right … in no way undercuts individual Fifth Amendment rights and the state’s privacy rights—that a search warrant somehow trumps the Fifth Amendment.”

“Is the proper focus on the passcode or the loot at the end?” Rabner asked, alluding to the wealth of information that could be uncovered from a cellphone.

Albin interjected, “There’s a difference between surrendering keys to the safe and to giving up the combination to the safe.”

“Directly on point,” Sciarra shot back.

“I think this is a situation where the court can clearly articulate that we are a Fifth Amendment state and have protections in place,” Sciarra said. “We don’t know what the future holds. You are protecting a private enclave—one’s thoughts.”

According to the state, a log of Andrews’ intentions and whereabouts can be found on a pair of iPhones he owned in 2015—an iPhone5 and an iPhone6.

That year, according to court documents, Andrews was identified by a suspected drug dealer as aiding him while he was part of a task force of the Essex County Prosecutor’s Office looking into a suspected narcotics-trafficking network out of Newark. The man, Quincy Lowery, singled out Andrews for allegedly helping him conceal his illegal activities. Lowery said the two had been texting one another on one of Andrews’ iPhones, authorities allege.

The Internal Affairs Department of the prosecutor’s office asked Andrews to turn over his two iPhones. Andrews complied and turned the iPhones in, but he refused to consent to a search of either phone or give a statement, documents said.

In June 2016, an Essex County grand jury returned a six-count indictment against Andrews, charging him with second-degree official misconduct and other offenses.

In January 2017, the state filed a motion to compel Andrews to disclose the passcodes required to unlock his iPhones that internal affairs had seized as its only way to ascertain whether they contained any of the missing texts between Lowery and Andrews.

On appeal, the Appellate Division on Nov. 15, 2018, affirmed the ruling in favor of the state. “Applying the privilege against self-incrimination to cell phone passcodes would essentially preclude the State from obtaining the contents of any passcode-restricted device as part of a criminal investigation,” Judge Joseph Yannotti wrote for the panel.

The Supreme Court granted Andrews’ petition for certification of the case on May 6, 2019.

Among the amici presenting arguments Tuesday, the ACDL-NJ said compelling Andrews to give up his passcodes would not only violate his constitutional rights but also cause “irreparable harm.”

“Compelling Mr. Andrews to provide his passwords is no different than forcing him to provide the state with more traditional statements or testamentary documents that may be used in a prosecution against him,” said Matthew Adams of Fox Rothchild, arguing for the association. “It is simply impermissible within the bounds of established law.”

“First, compelling a defendant to provide a passcode would violate the privilege against self-incrimination and under New Jersey law,” said Keating, of the Keefe Law Firm. “Second, the government cannot obtain a ‘superior right of possession’ to a defendant’s thoughts.”

Justice Lee Solomon asked a question of Elizabeth Jarit, a deputy public defender who argued on behalf of her office. Police “have the right to the iPhone,” so “what is the difference with having the right to the passcode?” Solomon said.

“The Fifth Amendment protects against compelling a suspect to reveal the content of his own mind that will be used to further his prosecution. That is precisely what the state wants to do in this case,” Jarit said. “It’s what the suspect has to do to access that information. This is about the state invading one’s mind.”

“Cellphones now contain a trove of personal information,” said Megan Iorio, appellate advocacy counsel for Washington, D.C.-based Electronic Privacy Information Center, when her turn came up. “Technology has grown by leaps and bounds and so has the use of an iPhone, which now has the contents of the user’s mind. Anything you can think of, there’s an app for that. This amount of information is a concern in a Fifth Amendment context because it’s not exclusive to the Fourth Amendment [on search and seizure]. A seismic shift in technology requires new thinking.”

On behalf of the state, Assistant Essex County Prosecutor Frank Ducoat, director of the Appellate Section, said his side wants to be able to do their jobs effectively during a criminal investigation. Ducoat has been involved with the case since 2015.

“At the end of the day, all we are after is that the court provides a practical solution to achieve execution of the valid search warrant,” Ducoat said.

Ducoat was asked by Rabner if Andrews’ cellphones have been accessed.

“If this court does not rule your way, are you going to try harder?” Rabner asked.

“We have tried harder,” Ducoat said. “We have not been able to find anyone to open his cellphones.”

To which Albin said, “If the state cannot find the gun in a shooting, it’s similar.”

Ducoat disagreed. “Here we have the phone,” he said, looking directly at the justices. “If you look at the search warrant, we are entitled to everything in that phone. The state has the right to superior possession of the phone by virtue of the search warrant.”

“Are you asking us to reverse our position in Guarino?” Albin asked as he read passages from case law regarding an individual turning over corporate records after being subpoenaed by the state.

Ducoat said Guarino is not controlling in this case because State v. Andrews is dealing with different issues. The defendant is “not giving up something that we already don’t know.”

“We are asking for a workable solution moving forward,” Ducoat said. “What has happened is we get requests from police officers for court orders. Most of those requests are denied if we don’t think we can make the proper showing. If we don’t make a proper showing, then we won’t be entitled to the passcode.”

“We are not running wild all over the state and opening up passcodes. This case is unique,” Ducoat added.

“I think the court should adopt the foregone conclusions test because I think it strikes that balance. We are not asking [the defendant] to provide more information than what we aren’t already entitled to. We are walking on new territory,” Ducoat said.

Second to present on behalf of the state was Deputy Attorney General Lila Leonard, who said it could take decades to get to a correct passcode. “That’s why we have a search warrant and a court order,” she said.

Leonard said, “Yes. We are anticipating it could.”

Sussex County First Assistant Prosecutor Greg Mueller, who argued for the County Prosecutors Association of New Jersey, an amicus, said it comes down to striking a balance, and that’s why the Appellate Division got it right.

“We are talking about a balance of considerations here. Do we not have discovery rights to his cellphone?” Mueller asked. “He is texting about an ongoing investigation to a co-defendant. I think we do.”

“Thank you very much,” Rabner concluded. “We will take the matter into consideration.”