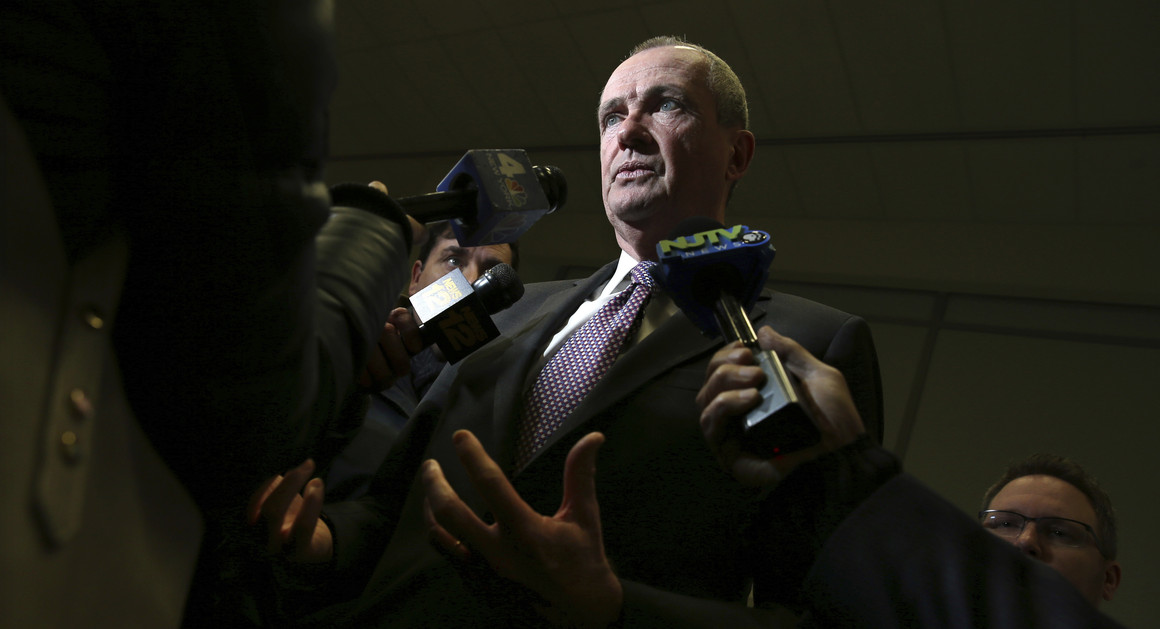 “Today, the Garden State has made again clear that it cannot and it will not wait for Congress to act,” Phil Murphy said. | AP Photo

MORRISTOWN — Gov. Phil Murphy’s administration plans to use the “power of the purse strings” to advocate for stricter gun policies not just in New Jersey, but nationally.

Murphy on Tuesday signed an executive order that will govern how New Jersey does business with firearms retailers and manufacturers as well as banks and insurance companies as they relate to the firearms industry.

The order directs the state to reach out to the half-dozen gun and ammunition vendors within whom the state contracts to “to ascertain whether vendor practices, where applicable, adhere to the applicable public safety principles related to firearms.”

It also directs state Treasurer Elizabeth Maher Muoio to reach out to financial institutions with which the state does business to see if they’ve adopted a code of conduct “or principles related to gun safety or responsible sales of firearms.”

In addition, the order directs Banking and Insurance Commissioner Marlene Caride to “take all appropriate action” to “limit the sale, procurement, marketing or distribution of insurance products that may serve to encourage the improper use of firearms.” (The office last week announced it had fined an insurance company $1 million for selling NRA-sponsored personal gun liability insurance).

Murphy said the state would use its financial leverage by moving business from companies that have strict gun policy standards.

“I am as proud of the ‘A‘ rating New Jersey has received, led by my dear friends Gabby Giffords and Mark Kelly, as I am of the ‘F‘ I personally received from the gun lobby,” Murphy said at a press conference before signing the order. “We cannot stop. And we need legislators from communities that support common sense gun safety, whether it be communities like Morristown or Parsippany or Westfield where we were a couple months ago, among others, to support this important work.”

Murphy said the executive order only applies to state vendors, though he said many municipalities and counties purchase firearms through an approved list of state vendors. His adviser on gun policy, Bill Castner, said the state alone in recent years has spent $70 million on firearms and related supplies. Murphy said New Jersey pays roughly $1 billion annually in bank fees.

Murphy said the hope is to use New Jersey’s financial clout to effectively change how guns are sold and marketed even where there is not the political will to do so.

“Today, the Garden State has made again clear that it cannot and it will not wait for Congress to act,” Murphy said.

Muoio said the plan uses “the power of our purse strings to set an example for others.”

“The [executive order] being signed today will ensure that taxpayers’ dollars are being used wisely to support good actors and those who are eager to do better, to procure goods and services from companies that are willing to go the extra miler because they understand what’s at stake,” she said.

Murphy, a Democrat, has made gun control one of his signature issues during his year-and-a-half in office, and has found it to be an issue with which he can often — but not always — unite his otherwise fractious party.

Tuesday’s signing ceremony for the order was held in front of town hall in Morristown — in the heart of the competitive 25th Legislative District, where Democrats hoping to claim two long GOP-held Assembly seats have made gun control a major issue in the campaign.

Murphy said the location choice was a “coincidence.”

Democratic Assembly candidates Lisa Bhimani and Darcy Draeger last month criticized Assemblyman Anthony Bucco (R-Morris), who over the years has earned high marks from the NRA, for voting against a recently-enacted law to further limit the size of ammunition magazines permitted in New Jersey.

“I was not invited as far as I’m aware, but I’m not going to speculate as to why the governor chose Morristown to unveil this policy,” Bucco said in a phone interview. Bucco said he is serious about combating gun violence and noted that he sponsors a bill, NJ A5242 (18R), to train police, school staff and students to “report behaviors that signal potential threats to school safety.”

Three months ago, Murphy held similar event on gun control in Westfield, which is the hometown of Assembly Minority Leader Jon Bramnick (R-Union), whose Democratic opponents have also focused on his gun-related votes.

Alexander Roubian, president of the New Jersey Second Amendment Society, attended Tuesday’s ceremony and asked Murphy a question in which he suggested the crackdown on insurance policies that pay for self-defense liability policies costs could come at the expense of retired law enforcement officers who are worried about “overzealous” prosecutors. Murphy said he believes the policies “encourage irresponsible behavior.

But Roubian held back on criticizing the administration’s plan as a whole, saying he wants to hear more details first.