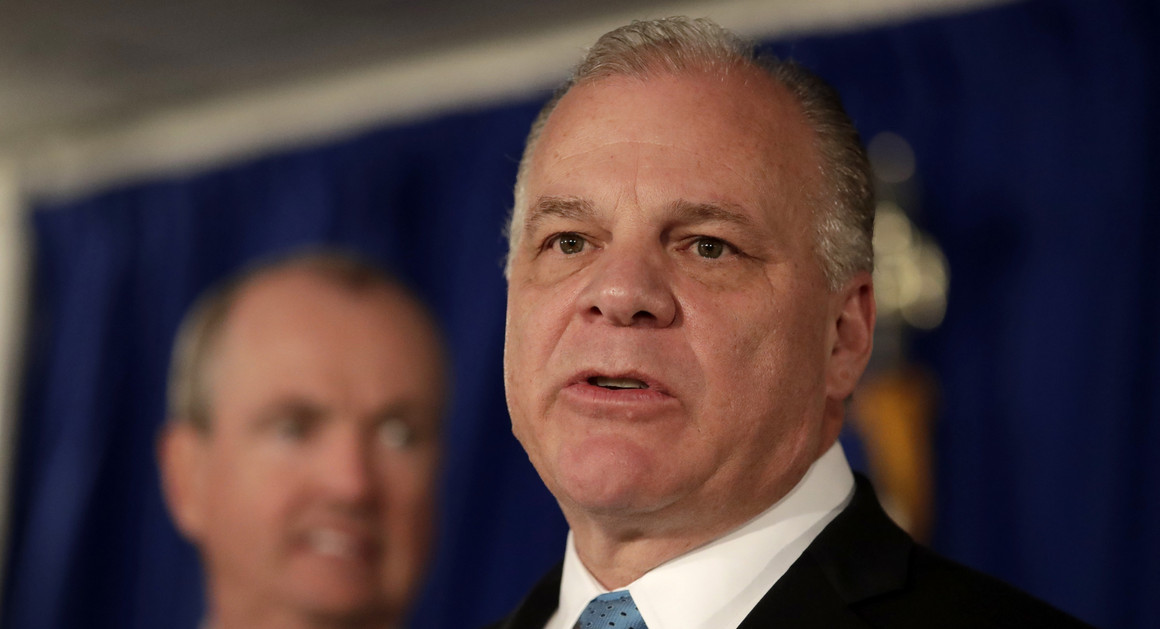 Senate President Steve Sweeney refused to attend amid the dispute between the administration and officials who believe a Murphy-appointed task force’s investigation of the state’s tax incentive programs to be politically motivated. | AP Photo

TRENTON — Legislation that would legalize marijuana for recreational use in New Jersey appears to be dead — at least for now.

The Democrat-controlled Legislature no longer expects to vote this month on a package of three bills that would legalize cannabis for recreational use, expand the state’s medical marijuana program and create new ways to expunge old records of criminal charges, according to two legislative sources familiar with the discussions.

Instead, the Legislature might move forward on a medical cannabis bill, NJ S10 (18R), independent of the recreational use and expungement measures, the sources said.

“This thing is dead. They just need to call it,” one legislative source said.

Gov. Phil Murphy, Senate President Steve Sweeney and Assembly Speaker Craig Coughlin were scheduled to discuss potential changes to the legalization bill at a meeting Thursday afternoon. However, Sweeney (D-Gloucester) refused to attend amid the ongoing, and increasingly contentious, dispute between the administration and South Jersey officials who believe a Murphy-appointed task force’s investigation of the state’s tax incentive programs to be politically motivated.

Sweeney claimed he was in another meeting that was of greater importance to the state, though he refused to provide specifics.

“Clearly the prospects for cannabis legalization being voted on this month have taken a darker turn, thanks to the distraction caused by the war being waged on economic development credits in the south,” said lobbyist Bill Caruso, who sits on the steering committee of New Jersey United for Marijuana Reform.

Murphy met with Coughlin (D-Middlesex) on Thursday after an unrelated bill signing ceremony at the governor’s office in Trenton. Outside Murphy’s office, Coughlin told POLITICO that “we’re getting to a point where we’re going to have to come to a real conclusion whether it’s [a marijuana legalization vote] going [to happen].

He declined to say whether a May vote is now out of the question, quickly adding: “Hope springs eternal.”

The prospects of approving the legalization bill, NJ S2703 (18R), were never really in question in the Assembly. Coughlin previously told reporters he had enough support to pass recreational use legislation on March 26, when a scheduled vote was canceled after it became clear Sweeney and Murphy had failed to whip up enough votes in the Senate.

Two Essex County Democratic senators believed to be aligned with Murphy — Ron Rice and former Gov. Richard Codey — refused to back legalization. Sen. Paul Sarlo (D-Bergen), a member of Sweeney’s leadership team, also remained opposed and on Wednesday published an op-ed in the Asbury Park Press calling for separate legislation to open up the medical program. Sen. Joe Lagana (D-Bergen) was believed to be on the fence as well.

The dearth of Democratic support left Sweeney and Murphy well short of the 21 votes needed to assure the bill’s passage in the upper house. As of Thursday, the whip count was more or less unchanged as New Jersey’s political climate had grown increasingly toxic.

Murphy’s relationship with Sweeney has been rocky from the outset, but the two leaders made a point of conveying their mutual respect around the time of the canceled marijuana vote.

Since then, a Murphy-appointed task force has been investigating New Jersey’s tax incentive programs and how several companies linked to South Jersey Democratic power broker George Norcross benefited from the credits for projects in Camden. South Jersey Democrats aligned with Norcross have been openly hostile to Murphy, who they believe launched the investigation for political reasons.

In a brief, wide-ranging conversation with reporters on Thursday, Sweeney called the task force investigation “slanted” and “McCarthyist” and claimed he decided not to attend the meeting with Murphy to instead take a meeting that was of greater importance to the state.

“I clearly don’t have the votes [for marijuana legalization] in the Senate at this time. So we’ll see where we go,” Sweeney told reporters shortly after Murphy’s meeting with Coughlin

Two administration officials said they still believe there’s a way forward to advancing the recreational bill in the Senate.

However, Murphy has said he will expand the medical marijuana program through executive action by the end of the month if the Legislature doesn’t hold a vote, disrupting the political calculus behind linking medical expansion to the legalization of cannabis for recreational use.

Sweeney tied the fate of the legalization bill to separate bills to expand the medical cannabis program and another measure that creates new ways to expunge old criminal records, NJ A4498 (18R), in an attempt to drive more support for recreational use legislation. Expanding the medical program, either through a separate act of the Legislature or through executive action, would have the effect of breaking up the bill package.

Marijuana “wasn’t left for dead” in Murphy’s meeting with Coughlin, one administration official told POLITICO, adding that there would likely be more conversations among administration and legislative staff in the coming weeks. With that said, Sweeney’s decision to cancel the meeting likely left too little time on the clock to resolve outstanding issues in time for a vote this month.

“It doesn’t mean that it won’t happen in June,” the administration official said.