HOBOKEN, N.J. — A commuter train crashed at a station in New Jersey during the Thursday morning rush, killing at least one person and injuring about 100 others, a number of them seriously, the authorities said.

“There are fatalities,” said a senior transportation official who did not want to be identified because he was not authorized to speak publicly. “There are a significant number of injuries. The train was going very fast. There are structural concerns about the facility.”

Jim Smith, a spokesman for New Jersey Transit, said a commuter train struck the Hoboken Terminal building on Track 5 around 8:45 a.m. The train was No. 1614, traveling from Spring Valley to Hoboken on the Pascack Valley line .

Michael Larson, an agency employee, was in the station when the train crashed. He said he crawled on his hands and knees to pull people out of the first train car.

“The first car was pretty well destroyed,” he said at the station. “The whole roof was caved in. The seats were broken.”

Mr. Larson, who had blood on his pant leg, said that “by looking at the damage” he suspected there had been fatalities.

The train went “over the bumper block, through the depot,” and came to rest at the wall right before the station’s waiting area, Mr. Larson told reporters during a segment that was broadcast on CNN.

“One of the worst days I’ve ever seen,” he said.

Rail service was suspended into and out of the station, including service provided by the PATH system, which runs between Manhattan and New Jersey. Local buses and ferries were accepting New Jersey train tickets as a result of the accident.

Jason Danahy, who was on the train, said it was filled with commuters and pulling into the station when it abruptly came to a halt.

“From the fifth car, it felt like a major skid,” he said. “A creaking noise and a skid. I was lucky to be on the fifth car.”

When he got off the train, it was chaotic in the station.

Shortly after the crash, Hoboken, which sits along the Hudson River, was aglow with blue, red and yellow lights of emergency vehicles flooding its southeast corner, near the train station. 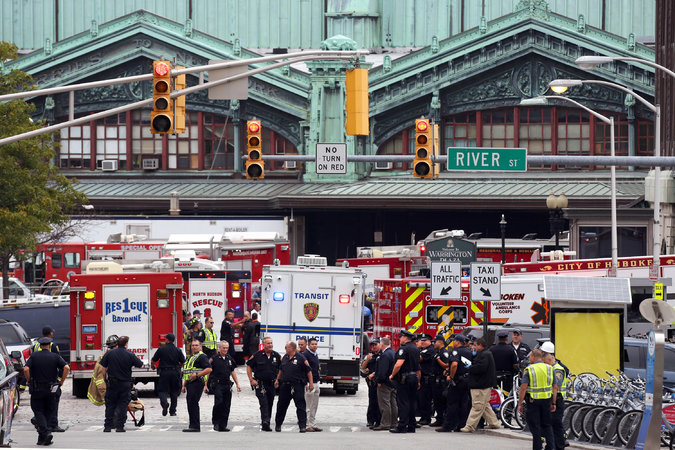 Ben Fairclough said he was transferring at the station when he saw the derailed train, which was blocking part of the terminal.

“There were wires down, water pouring from the ceiling, the roof had collapsed and there was people climbing out of windows of the train,” he said.

A video taken by Mr. Fairclough shows passengers climbing out of the train, walking over the debris from the crash. Metal beams are on the ground; wires hang haphazardly. “Clear the area,” someone shouts.

Mr. Fairclough said one person appeared to be unconscious on the ground. Others were bloody, he said.

“Cars drive into houses,” he said. “This was a train that drove into the terminal.”

Tom Spina said he was in the terminal when “we heard a loud boom.” He walked toward the chaotic scene.

“You saw folks bleeding from the head, limping, folks were on the ground,” he said. “It was awful.”

Matthew Lehner, a spokesman for the Federal Railroad Administration, said the agency was aware of the crash and had dispatched investigators.