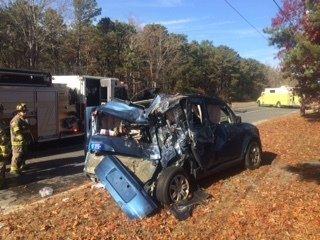 Four people, including an infant, were hospitalized with minor injuries on Nov. 9 following a crash involving a dump truck on Route 72. (Courtesy of the Stafford Township Police Department)

STAFFORD TOWNSHIP – Four people, including an infant, were hospitalized Monday following a crash involving a dump truck on Route 72.

On Monday, a tri-axle dump truck loaded with gravel – which was being operated by Craig VanVliet, 51 of Holland, Pennsylvania – was traveling east on Route 72 when it crashed into the rear of a stopped vehicle, police said.

The passenger vehicle – being driven by Amanda Lynn, 30, of Waretown – was stopped on Route 72 east waiting to make a left turn into a medical office building, police said.

Lynn and her 2-month-old child sustained minor injuries were transported to Southern Ocean Medical Center and they were later treated and released. A rear passenger in Lynn’s – Nelda Eberhart, 74 of Waretown – sustained a moderate injury and was transported to the trauma unit at AtlantiCare Regional Medical Center in Atlantic City, police said.

VanVliet sustained minor injuries from the collision and was transported to Southern Ocean Medical Center for treatment, police said.

The portion of Route 72 between Breakers Drive and Hull Drive was closed for five hours during the investigation, and traffic was diverted through Ocean Acres during that time.

Police said charges are pending against VanVliet for causing the collision, which is being investigated by the Stafford Police Department’s Traffic Safety Unit.

Lynn’s vehicle was heavily damaged by the collision and Stafford police attributed the infant’s minor injuries due to the fact that the child was properly secured in an infant car seat located in the middle rear seat of the vehicle.

The dump truck also spilled several gallons of diesel fuel that was cleaned up by Hazmat teams from the Barnegat and Berkeley Township fire companies.