A Dragnet at Dewey & LeBoeuf Snares a Minnow 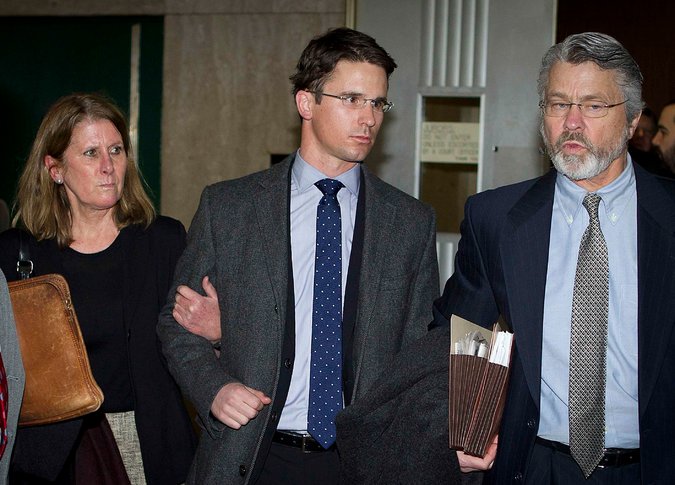 Zachary Warren, center, after his arraignment this month at Manhattan Criminal Court, with his mother, Christie Warren. Credit Carlo Allegri/Reuters

“Can you say that again?” a stunned Mr. Warren asked when he received the call two weeks ago Friday.

Almost as surprised as Mr. Warren himself were Mr. Warren’s cellmates before his arraignment a week ago — the top managers of Dewey & LeBoeuf, the global law firm that imploded in 2012. Although some of them had trouble remembering who Mr. Warren was, the indictment claims that all four were co-conspirators in a major accounting fraud. The firm’s chairman, executive director and chief financial officer, ages 60, 57 and 55, had long known that they were the subjects of a criminal investigation. All had prominent criminal lawyers, while Mr. Warren had hired a lawyer only after the phone call that Friday.

Alone among the defendants, Mr. Warren was charged in two separate indictments, one accusing him of a “scheme to defraud” and falsifying business records and the other charging him with six felony counts of having “made and caused” false entries in books and records. Mr. Warren pleaded not guilty and was released on $200,000 bail. His once-bright future has now been threatened. 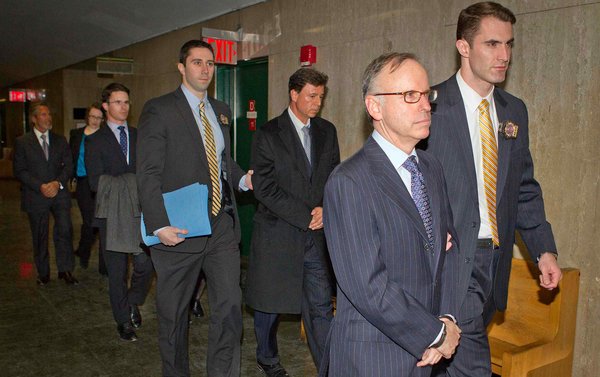 How did a 29-year-old with an impeccable record, someone who had never even taken an accounting course, end up as an accused mastermind of what the Manhattan district attorney, Cyrus Vance Jr., called “a massive effort to cook the books” of the once-giant law firm? And how did he get there without realizing he should hire a lawyer?

According to several criminal defense lawyers I spoke to this week, Mr. Warren became caught up in an increasingly common prosecutorial tactic. Mr. Warren may have been naïve, but he thought he was being questioned as part of a civil Securities and Exchange Commission investigation. He thought he might be a witness, and thus did not need a lawyer. Only too late did it dawn on him that he might be a target of a criminal investigation. The defense lawyers said prosecutors were increasingly using so-called parallel investigations to insert criminal investigators into what their targets thought were civil proceedings.

“It’s a serious threat to civil liberties, and people should know about it,” said Thomas J. Curran, a criminal defense lawyer in New York and a former prosecutor under the former Manhattan district attorney Robert Morgenthau. “Now, this is going on all over the country.” While this isn’t illegal or technically improper, “It’s dangerous,” Mr. Curran said. “They’re using civil proceedings to advance their criminal investigations. It’s a real threat to the cherished right to counsel.”

A spokeswoman for the Manhattan district attorney, Erin Duggan Kramer, countered, “The facts here are incorrect.” She added, “The claim that an attorney with a federal clerkship could have any misunderstanding of what it means to speak with and agree to meet with the D.A.’s office is preposterous.”

Mr. Warren didn’t comment for this article. But people close to him said he thought he was far removed from the troubles of Dewey & LeBoeuf, since he left long before the 2010 bond offering that is the focus of the S.E.C.’s civil fraud charges. Mr. Warren was a 24-year-old Stanford graduate when he applied to what was then the LeBoeuf firm for a position as a paralegal. Instead, he was offered a $40,000-a-year job helping partners collect client debts. His hard work so impressed his colleagues that he was promoted to “client relations manager” in June 2008, earning a salary of $100,000 a year.

Mr. Warren had long wanted to go to law school, and saw his stint at Dewey & LeBoeuf as a way station. Both his parents are lawyers: His father is a retired California state court judge, and his mother is a professor at William & Mary’s Marshall-Wythe School of Law.

Mr. Warren excelled at Georgetown, where he was articles editor of the law review. He landed a coveted clerkship on the Federal District Court in Baltimore with Judge J. Frederick Motz, and then on the Sixth Circuit with Judge Julia Smith Gibbons. He is a member of the California and District of Columbia bars, and has a job offer from the prestigious Washington law firm Williams & Connolly.

It is rare for a sitting federal judge to comment on a pending criminal case, but Judge Motz told me this week, “Zack is a wonderful person, a decent, fine young man.” He added: “I’m so sorry he’s being put through what’s happening. He worked very hard and was a wonderful person to have in the office. I trust him completely.”

For Mr. Warren, the first inkling of potential trouble came early last year, when he received a call from prosecutors in the Manhattan district attorney’s office. Mr. Warren answered questions and provided what he interpreted as background information, according to accounts he subsequently gave to his friends. The exchange seemed cordial, and he heard nothing more.

In late October, an S.E.C. lawyer investigating the bond offering contacted him. Mr. Warren had had nothing to do with it and, because he had not been subpoenaed, was under no obligation to testify. But he wanted to be helpful and cooperative, and he agreed to take time off from work in Memphis and travel to Washington to provide what he continued to think was just background information in a civil investigation.

Then, in a subsequent call, an S.E.C. lawyer told him that a lawyer from the district attorney’s office would be sitting in. Did Mr. Warren mind?

This is what upsets Mr. Curran, the defense lawyer. “It puts people in a very difficult position,” he said. “You want to cooperate, you agree to a meeting, then, whoa, the district attorney is in there. They say, ‘You don’t have a problem with that, do you?’ What can you say? Many times, they don’t even tell you ahead of time a criminal investigator will be there.”

Perhaps by now he should have realized that this was anything but a friendly interview.

Mr. Warren arrived at the S.E.C. offices on Nov. 15. After the S.E.C. lawyer asked some introductory questions, Mr. Moser, the assistant district attorney, took over. An F.B.I. agent was also present, and other prosecutors were listening from New York.

By all accounts, the interview was a disaster for Mr. Warren. He had trouble remembering details from his time at the firm, which prosecutors interpreted as evasion or, worse, lying. They showed him emails and documents, most of which he did not recall. He was not prepared for the hostile tone and became defensive. Prosecutors thought that Mr. Warren was arrogant, even that he was “playing them” by trying to ferret out what they knew, rather than offering to help the investigation.

At one point, it occurred to Mr. Warren that he might be a target, and he asked Mr. Moser if that was the case. The prosecutor did not answer directly, but said, “This is a serious matter.”

Mr. Warren asked, “Should I hire an attorney? Maybe I shouldn’t be talking to you.”

The prosecutor said he couldn’t advise people whether they should have lawyers.

This, in any event, is what Mr. Warren has told his friends. (Others with knowledge of the interview insist that he was told point-blank to hire a lawyer and that he was in jeopardy, a courtesy not extended to many potential defendants.)

Mr. Warren went to see a friend, a former Georgetown classmate and fellow District Court clerk, right after the meeting. “He was shaken,” his friend said. “He said he couldn’t give them the answers they wanted, and they got really frustrated and upset.” The friend added: “I don’t think he thought he might be a target. He was worried that he might be subpoenaed to appear before a grand jury as a witness.”

As the year was drawing to a close, the five-year statute of limitations was about to expire, since some of the events in which Mr. Warren was involved occurred on Dec. 31, 2008. The three other defendants — the firm’s top ranking officers — were all asked if they would voluntarily extend the statute of limitations, which is usually a routine request. They agreed. But no one contacted Mr. Warren, which would have put him on notice that he was a target and would need a lawyer to negotiate the extension.

Mr. Warren heard nothing until he received the news of his indictments. Ordered to appear in court, he finally said, “I think I’d better check with a lawyer.”

His friend said: “He was caught completely off guard. He had to ask the prosecutor to repeat it because his mind went blank.”

Mr. Warren’s parents visibly wept at his arraignment. His friends were stunned. Some of them asked their employers for permission to be quoted by name but were turned down.

So far, Judge Gibbons continues to employ him as a clerk, and Williams & Connolly has not withdrawn its job offer. And the S.E.C., concluding that Mr. Warren had no involvement with the 2010 bond offering, didn’t bring any charges against him.

Whatever the eventual outcome of the criminal case, Mr. Warren’s case has been the talk of the criminal defense bar this week. “The whole thing is bizarre,” Mr. Curran said. “Why indict him twice? Why indict him at all? I can tell you that in Morgenthau’s office, a more measured approach would likely have prevailed. We’d have told him, ‘You’d better get a lawyer because the train is pulling out and you’re on the tracks.’ There must be a reason the district attorney proceeded against this young kid this way, and I and a lot of other people will be very interested to hear what it is.”