The crash occurred at around 7:25 a.m. on the eastbound side of the highway near milepost 13.2 in Upper Freehold, Trooper Lawrence Peele, a New Jersey State Police spokesman, said. 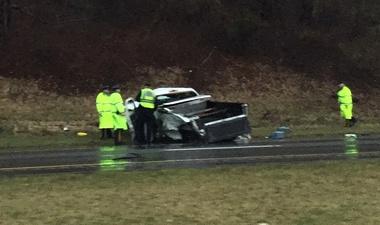 The Chevrolet Silverado pickup truck overturned after it was hit by the Saturn Monday morning on the eastbound side of I-195 in Upper Freehold. (Matt Dowling | NJ Advance Media for NJ.com

Peele said a Saturn VUE was traveling westbound on the highway when the driver lost control, crossed over the grass median and struck a white Chevrolet Silverado pickup truck on the eastbound side of I-195.

The impact caused the pickup truck to roll over, Peele said. Two lanes on the eastbound side of the roadway were closed for about an hour, causing traffic delays for miles.

The driver of the Saturn, 62-year-old Gaston Galis-Menendez of Toms River, and the Silverado, 61-year-old Dave Schmidt of Alloway, were both taken to CentraState Medical Center in Freehold for precautionary reasons, Peele said.

A third occupant in one of the vehicles also suffered a minor injury, and was taken to the same hospital. Peele did not know which vehicle that occupant was inside.

The crash remains under investigation, and the reason why the driver of the Saturn lost control is not known at this time.

No citations were issued Monday morning.